Is Tom Ince on the brink of a breakout Championship campaign?

Tom Ince is settling in well at Stoke City. Finding a permanent home would be nice. The Potters are his ninth club. He won't turn 27 until January.

Arriving from Huddersfield in July, the well-travelled winger took a few games to adjust but has recently found fine form. It wasn't until 22nd September that Ince produced his first goal. It came during a 3-2 loss at home to Blackburn Rovers. Nevertheless, the 26-year-old began to show his worth. Not a few fans deemed the £10 million Gary Rowett paid the Tigers extravagant. Now that the youngster is off the mark, they're warming to the possibilities. A week later while away to Rotherham United, Ince's second goal began a comeback that rescued a point from a 2-0 deficit.

Three days later, he displayed match-winning quality. A corner against Bolton Wanderers at the Bet365 Stadium set up Bruno Martins Indi to put Stoke City one-up. During the second half, he produced the goal to seal a 2-0 victory. While extremely reluctant to trade on his famous father's name, it's evident the apple doesn't fall far from the tree. It took a while but Ince looks to have found his way with the Potters.

Hopefully, he can help the rest of the squad find theirs. The Bolton win was just Stoke's third in 11 games. Potters faithful can only hope to see more Man of the Match performances from the new man. A follow-up win over Norwich pushed Stoke to 14th in the Championship, a mere three points from the playoff places, albeit with a healthy crowd in their path. 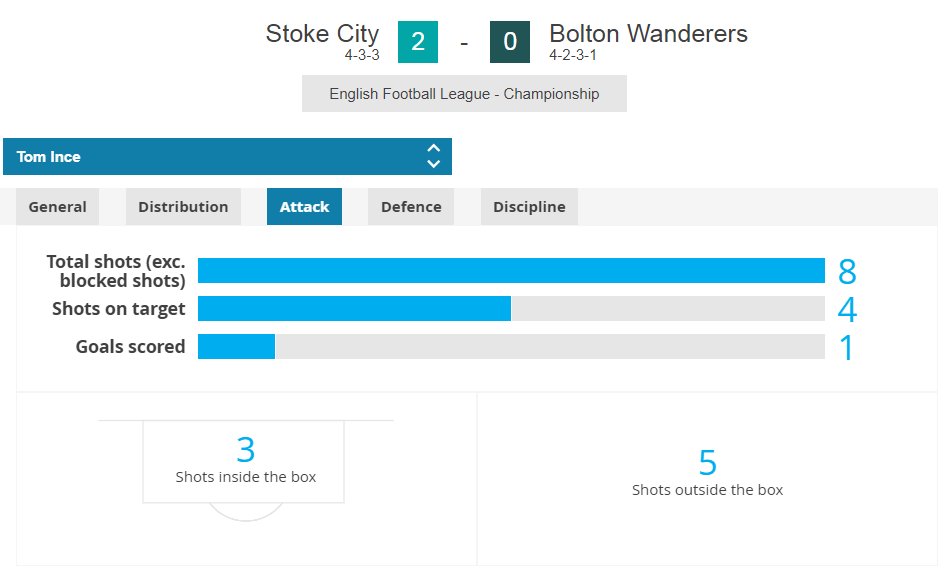 Ince has played at a fair few clubs in his time. Loan spells at Notts County, Crystal Palace, Nottingham Forest and Derby County fit between 'permanent' stays at Blackpool, Hull and finally Derby. Perhaps his best football came at Pride Park. In three seasons, he made 105 Championship appearances, scoring 37 times. With Frank Lampard calling the shots these days, Ince may regret leaving. The move to Huddersfield slowed his pace, just two goals in 33 appearances, and demonstrated the gap between England's first and second tiers.

The former England U-21 is a counter-attacking threat but tends to ease off the gas to cut inside from the right flank. On his favoured left foot, he can unleash heavy shots or whip inswingers into the box for Benik Afobe and Saido Berahino.

Ince's current form could build into a perfect storm for Stoke. Afobe is keeping pace with him, on four goals and two assists. The Potters may become the dangerous side everyone anticipated before the season began.

Other players in the Championship must be overtaken. Blackburn's Bradley Dack, 2017/18's League One Player of the Season, already claims six strikes. West Bromwich Albion boast two who can beat that. Dwight Gayle has eight and Jay Rodriguez seven. Brentford's Neal Maupay leads the way with 10 and three assists.

Tom Ince may not be at the top of the goalscoring charts but his progression with Stoke City is quite promising. With improved play, he's contributed to the club's resurgence. Gary Rowett must milk him for consistency. Finding the right balance is key. If Ince carries on, he could have a sublime season with the Staffordshire based club.

For my sins, I'm a season ticket holder at Stoke City, I have been proud to watch them for over 20 years. I follow most of the UK leagues and the major European ones too, and I've been told that I talk way too much about football.