Why Mason Mount's England call-up is no surprise

Gareth Southgate's latest England squad selection had a more youthful look to it when the news was announced on Thursday. The headlines were dominated by a talented trio earning their first senior call-ups, as Leicester playmaker James Maddison and Borussia Dortmund winger Jadon Sancho were both called up.

The third new face was that of Derby County's Mason Mount (on-loan from Chelsea). Despite still being 19, his inclusion is no surprise and instead testament to the maturity he has displayed to earn regular first-team minutes.

The Portsmouth-born midfielder joined the Blues as a six-year-old and benefited from being fast-tracked into U18 and U23 action at a younger age than most players. Not only did he possess the technical ability to warrant such belief from youth coaches, he performed with a refreshing air of confidence too. Age was just a number.

So much so that when he extended terms until 2021 in West London last summer, the Academy Player of the Year did it before leaving for Eredivisie side Vitesse Arnhem. The news initially came as a surprise, given how English players have never tended to flourish outside home comforts. But the deal made sense - he'd be earning valuable minutes in a new environment, a different country with a new language to learn.

Chelsea have loaned more than 20 players to Vitesse over the past eight years. Mount has proven himself to be one of their most influential acquisitions: scoring 13 goals, creating 10 more and helping them qualify for the UEFA Europa League.

Frank Lampard, who knows him well through his Chelsea connections, sealed a season-long loan deal for the playmaker at Pride Park this term - combining with Mount's former boss Jody Morris to continue helping him develop is a seamless transition.

"Mason can do anything he wants - he is that good. That's not to say he will go in and be an England starter in their next game, as it's Gareth's choice. But whatever level you put him in, because of his quality, work ethic and mentality – he wants to get better and better – he will do anything he wants to," Lampard was quoted as saying last month. 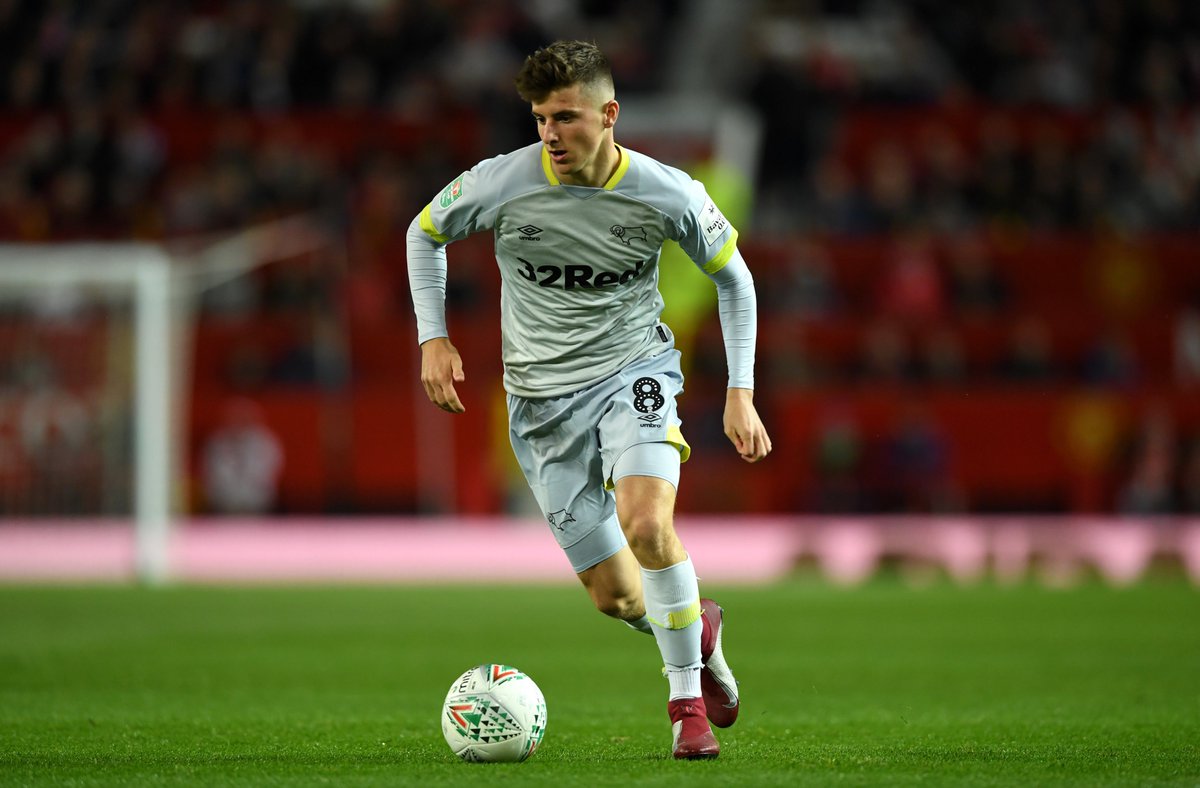 OptaJoe
OptaJoe
Follow
17 - Mason Mount has been directly involved in 17 goals in his last 18 league appearances across the Eredivisie and the Championship, including play-off games (10 goals and seven assists). Ascension. https://t.co/UhJvwU0Fe5
Follow
14:33 PM - 4th Oct 18
234
826

Mason has prior experience representing England, having played at U16, U17, U19 and U21 level to date. 36 appearances since his U16 debut four years ago, he was named Golden Player of the Tournament at the 2017 UEFA Euro U19 Championship - scoring one and creating four more on their route to a 2-1 final win over Portugal.

From the matchday 18 involved in their final victory, only Fulham's Ryan Sessegnon and Mount's club teammates Reece James (on-loan at Wigan), Jay Dasilva (Bristol City) and Dujon Sterling (Coventry) have genuinely progressed with regular first-team minutes since then. It speaks volumes that the talented youth are seldom given any opportunities at their parent clubs and have to leave to further their development elsewhere.

Mount specifically was invited to train with England's World Cup squad as a reward for his Vitesse efforts, while there is clearly a select group of youngsters in his age-group that are being monitored by Gareth Southgate, who himself was U21s boss once upon a time.

Is he good enough?

It's important to temper expectations during times like these: talented teenagers earning senior call-ups can often end in disaster, if not handled correctly. Mount is mature enough and a humble character, one that will not let the newfound publicity affect him - though you have to ask whether he'd be given an opportunity if some of the current crop (Dele Alli, Jesse Lingard, Fabian Delph) were not injured, could he retain his place there when everyone was fit?

A bonafide creator at a time where England have been calling for one, he is more attack-minded than Liverpool's Jordan Henderson, Tottenham's Harry Winks and equally versatile like Chelsea's Ruben Loftus-Cheek, who missed out this time. He is a quality player and one that will benefit from playing among more experienced heads, though there is a clear pathway for those in the U21s to earn recognition for their consistency with call-ups, like Tammy and Lewis Cook et al.

Current U21's boss Aidy Boothroyd said as much earlier this week, revealing that although it might seem early, it's an evolving strategy that will help in the long-term. Mason's first call-up is the reward for excellent form and he'll be hoping it's the first of many to come.

Mosope Ominiyi
Mosope is an enthusiast of young talent across European football. Former sports editor at VAVEL, he writes for a range of different sites - follow him @Football365Mo to keep updated with his writing on various platforms.

Leave a comment
Latest England National Team Articles
Is it James Maddison’s time to shine for England?
By Danny Glendenning

Gareth Southgate announced his latest England squad nine days ago for upcoming Euro 2020 qualifiers against Bulgaria and Kosovo. Among the usual suspects, there was a first call-up…

How can England's U21s fall at the first hurdle with all that talent?
By Jordan Street

What is it about England and semi-finals, eh? The Three Lions had the opportunity to end their last four hoodoo in the UEFA Nations League last night, but once again, after starting…