Where’s Leon Balogun? A simple Google search tells you he’s a defender contracted to Brighton and Hove Albion. But you’ll scarcely catch him helping The Seagulls in a competitive encounter.

Antecedents aside, if he’s not good enough for Brighton, why should he be for the Nigeria Super Eagles?

When Brighton signed Balogun last May, he was their first signing of the summer. Chris Hughton was excited to get the business done early. He lauded the transfer as one to bring solidity and panache to their defence.

One could’ve envisaged Balogun strolling into Albion’s first team and leading the team from the rearguard. One season after, that bit is yet to materialise...

The Premier League provides a thorough litmus test for every talent who comes near. Players signed for big money quickly turn bench warmers at the slightest drop in quality. Chelsea’s Gary Cahill can attest. In Balogun’s case, he was signed from Mainz on a free transfer and placed on a weekly way a little above £18,000.

The Germany-born Nigerian was tasked with helping Brighton stay afloat in the League. The objective’s oxygen was to concede the fewest goals possible. Sadly, the Seagulls reeked inconsistency through the campaign and shipped goals aplenty.

Nowhere to be seen

The fact is, with three games left of the season, Albion has allowed 54 goals. Their horrific defence highlights their uncomfortable position in the League – 17th – three points above the drop-zone.

As far as survival hopes go, Brighton’s is emaciating by the day. The Seagulls has lost six of their last seven games. They’ve conceded 13 goals in the process. Most humiliating of the lot was that shambolic 5-0 defeat at home to Bournemouth. 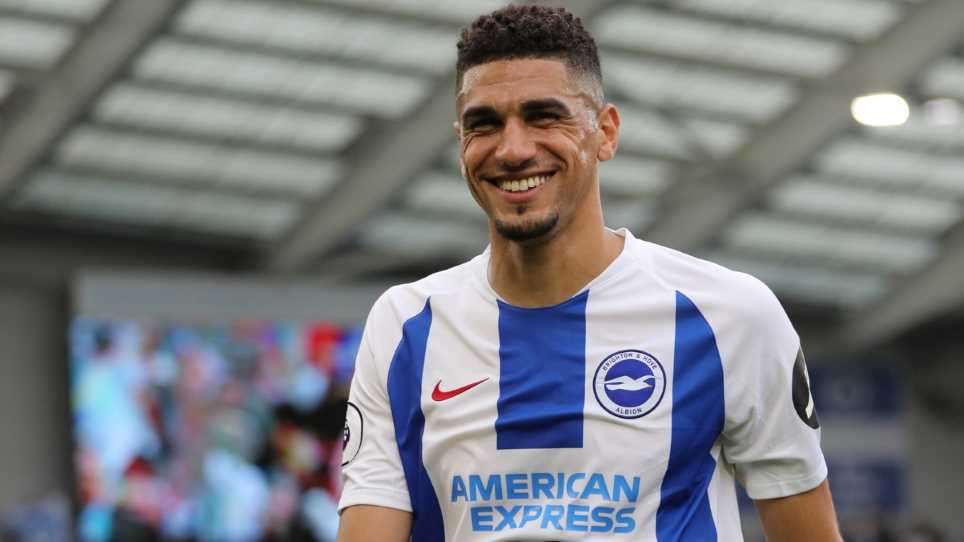 Crazy 10 minutes at the Amex!

With frightening fixtures against Arsenal and Manchester City still to come, Brighton needs a miracle in defence. Three draws would rubberstamp their League status for next season. But that in itself has the semblance of a pipe dream.

Despite Hughton and Albion’s calamitous finish to the campaign, Balogun has seemingly disappeared from the first team. Actually, you’d have assumed him injured until the defeat at Spurs; prior, Balogun hasn’t suited for Brighton since early September. He sat out the entire 90 at White Hart Lane.

Through the campaign, Balogun has played just 10 times for Brighton – eight in the League. He managed a League goal in Brighton’s win against Crystal Palace. A bright spot in a gloomy year.

It alarming, on 18 occasions, Balogun has found himself no more than a spectator, keeping the Brighton bench well warmed. The player hasn’t been injured this season, mind.

Balogun became a mainstay in the Nigeria national team sometime between 2015 and 2016. It was a testament to his form at Darmstadt and later Mainz. The lanky libero was a regular feature for each of these German sides.

Balogun’s move to the English top-tier was heralded like a move to Beverly Hills. Although the move was to an unambitious small team; fans back home were excited because they expected to watch him more often.

But the 30-year-old has sunk like a rock thrown into a pool at Brighton.

It’s hard to judge his fitness level. The guy must be match rusty anyway. He simply didn’t provide enough competition for Shane Duffy and Lewis Dunk. If they were any good Brighton shouldn’t be struggling so much in defence.

Super Eagles manager Gernot Rohr has on varying occasions opined he picks players based on club form. He walked the talk by ignoring Kelechi Iheanacho from Nigeria's last couple of AFCON qualifiers.

The Cup of Nations is less than two months away. Balogun’s obscurity at Brighton couldn’t have come at a worse time.

Rohr must keep his word and give no excuses for laxity and mediocrity. Balogun is no longer among Nigeria’s best central defenders. Only players who do the business week-in-week-out should get the nod. Leon Balogun isn’t.