Time for Barcelona to look beyond Gerard Pique?

Parading some of the best defenders in the game has contributed to FC Barcelona's success just as much as their dangerous front line has in recent times. Carles Puyol and Eric Abidal occupy a special place in the history of the club for that reason. Gerard Pique has also made a name for himself by following their good example. The 32-year-old has been a key figure in the heart of the team's defence for over a decade now.

Several managers (as well as defenders) have come and gone during his time at Camp Nou, but the former Spain international has remained untouchable. He also built a unique partnership with Sergio Ramos for the Spanish national team until his retirement last year. It was one that brought enormous success as La Furia Roja dominated the world and European football for several years; lifting both the World Cup and the European championship crown.

At club level, Pique has also enjoyed great success, winning all available trophies on offer both domestically and on the continent. too. But no one stays at the top forever. Sooner or later, the time comes when every player must give way. Either as a result of persistent injury, loss of form or just plain ageing, everyone must step aside someday. For Pique, that time is fast approaching.

But it appears Ernesto Valverde has not read the writing on the wall, which is understandable. When a team achieves success over a prolonged period with certain players seen as imperative figures, it’s easy to overlook their weaknesses.

However, when those problematic subplots begin to threaten progress on a bigger stage, necessary action must be taken. Despite running the show in La Liga, winning eight of the last 11 campaigns, Barcelona has become a laughing stock on the continent. Long gone are the days when winning the Champions League was a given. Two trophies in three years and Pep Guardiola made it look easy. When he left things became difficult once again.

Then came Luis Enrique. He built a strong team, returning the Blaugrana to the summit both in La Liga and on the continent. A Lionel Messi, Luis Suarez and Neymar partnership perfectly complemented a strong substructure. Pique was the commander-in-chief at the heart of defence.

Unfortunately, things have since changed. Neymar left to pursue a personal ambition in France. Messi and Suarez have been instrumental in keeping the team ahead of the chasing pack on the domestic scene.

💙Messi FC 💖💕
Alecia69825937
Follow
Pique is the LEADER in defense and he couldn't even lead defense in holding to a 1 goal lead!

But a weakened defence has been the chink in the armour for the team as far as competing on the continent is concerned. For two consecutive seasons Barcelona has been bundled out of the Champions League following heavy defeats. Despite taking healthy leads to away grounds, their defence has collapsed spectacularly. Two seasons ago it was AS Roma. Last term Liverpool did the damage.

While it can be argued the failure also resulted from the inability to score even a single goal, not conceding three or more goals in each case could have prevented the heartbreak. Letting in another two against Valencia in the Copa del Rey final rubbed salt to the wound. It meant the team lost the trophy to an opponent that was significantly weaker in the game but defended well.

In all of these instances, Pique has been a constant in Barcelona's defence.

Manager Ernesto Valverde has shown a preference to stick with the 32-year-old despite having French first-choice centre-back Samuel Umtiti available to him. Initially, the former Lyon man was Pique's preferred partner. The duo showed good chemistry and performed well. But since Clement Lenglet was acquired, he has been the preferred option to play alongside the Spanish veteran.

Although Umtiti has also spent time on the sidelines due to injury, he is now used sparingly. For instance, he was utilised in Barca's 0-0 draw against Huesca before the game against Liverpool. But he was not called upon at Anfield. Unable to cope with both the speed of thought and physical movement of Jurgen Klopp's men, the Pique-led defence collapsed like a poorly constructed bridge.

Unfortunately, the lessons have not been learned. The defence has remained intact and is getting even worse.

A look at the team's start to the new campaign shows this is a problem that is only growing for Barcelona. Three games played, just one win and no clean sheet. It was Pique's handball in the box that gifted Osasuna an equaliser in the 81st minute to end the game 2-2. That's another two goals conceded in consecutive matches.

As much as a team can bank on the luxury of having attackers that can score plenty of goals when in the mood, sometimes they are hard to come by. So keeping things tight at the back is always preferable. That's exactly what Diego Simeone is doing with Atletico Madrid. Two clean sheets in three games and the Rojiblancos sit top of the league table and have an early advantage in the title race.

It's now clear that to stay competitive both in La Liga and on the continent, Barcelona will have to reinforce the backline as much as the front. A quality replacement for Pique has become necessary in that regard... 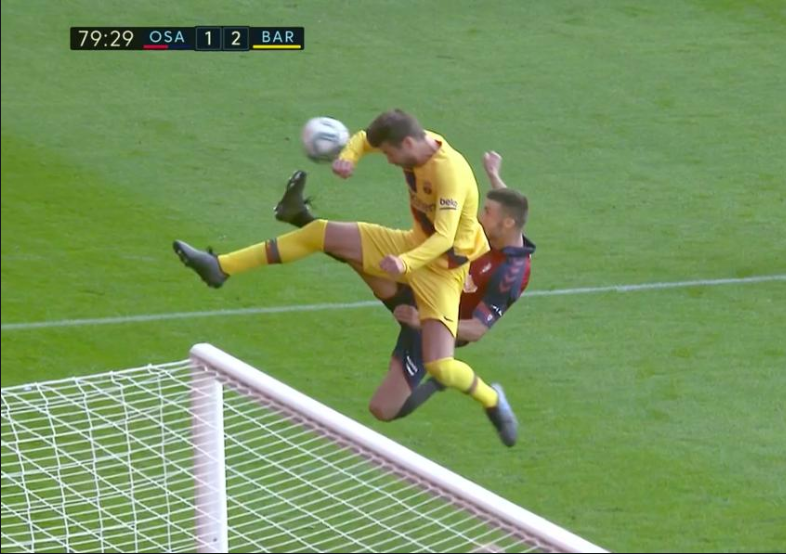