Why they were relegated – the story of Hull, Boro and Sunderland

By Kingsley Ukpai
Aitor Karanka British Football David Moyes Hull City Middlesbrough Mike Phelan Opinion Premier League Slider Articles Sunderland
Every British team aspires to play in the Premier League. The reason is not far-fetched; it's the most glamorous and lucrative league in the world. For this reason, getting relegated from the Premier League is not an option for most English clubs. Why then did the aforementioned clubs sink to the Championship?

The Premier League will make over £8 billion pounds from TV money over the course of the next three years. This money will be equally distributed between Premier League clubs, based on performance, the number of times they're shown live on TV and other criteria.

Despite finishing bottom of the pile, Sunderland will still stand to earn about £98 million this season. That's enough money to spark a fight to the death between clubs, in a bid to retain their Premier League status.

No matter how bloody the fight gets, every season, three teams are certain to be relegated. In the 2016-17 season, it is Sunderland, Hull and Middlesbrough who will sink to the Skybet Championship. Could these teams have stayed up if they'd done things differently? Why did they get relegated? Let's take a look.

The Tigers started the season in spectacular fashion; in a more decent term, they started the season exactly as they would have liked. They were so impressive that, Mike Phelan, then caretaker manager, was voted manager of the month of August. Judging from their early season form, very few pundits would've predicted relegation for Hull come May.

The problem with Hull City was that they were suffering from organisational instability. The Yorkshire club has been up for sale since 2014, and its Allam family owners were not willing to risk any substantive investment.

Hull dragged their feet with Phelan, procrastinating his confirmation for over three months when they eventually did, they failed to provide him with the funds to reinforce his squad. The Tigers were wobbly from September through December. Following a row with the club about January transfers, Mike Phelan was sacked. He had only stayed 85 days after being confirmed as Hull manager.

Marco Silva was appointed to replace Phelan, the Portuguese manager, had a remarkable impact on the Tigers; guiding them to six Premier League victories and three draws in the second half of the season, but the damage had already been done in the first. The Tigers sank to the second tier.

Boro is the one team that was expected to avoid the drop. The Smoggies had played some beautiful football in the Championship to earn automatic qualification to the money-spinning league. They were expected to replicate that same form in the Premier League. Boro had also kept their faith with the same manager, Aitor Karanka for over three years.
Welcome to the Premier League Middlesbrough! The word for them was ‘STRUGGLE' the team from the Riverside, struggled to make any form of meaningful impact. Even in games where they played brilliantly, they just couldn't get a result.

Unlike Hull City and Mike Phelan, Aitor Karanka had money to spend in the transfer market. The likes of Marten de Roon was brought in from Atalanta for £12.75 million; Adama Traore came in from Aston Villa for £7 million; Rudy Gestede also signed from Villa for £6 million; Patrick Bamford's loan deal from Chelsea was made permanent for £5 million; Victor Valdes joined for free from Manchester United; Gaston Ramirez, Alvaro Negredo, Calum Chambers all switched to North Yorkshire.

However, Karanka just couldn't rally his troops. The Spanish manager failed in his craft in the Premier League. His team were not creating enough chances to score. Scoring too few to get results wasn't just good enough. After a 10-game winless run, Karanka was marched out in March, after three and half years with the club.

The problem for Boro has always been their inability to create or score goals. Middlesbrough has been the lowest scorers in the league since February, with only 27 goals scored. If you don't score, you don't win. They've only managed one win since Karanka left in March; in ten games since the Spaniard's departure, Boro has only scored nine goals. Down to the Championship they go.

The Black Cats looked doomed for relegation from the start. They had hired a manager who had come back to the Premier League with a point to prove. However, David Moyes just could not get Sunderland to bite. Moyes' squad  had to wait until the first week of November to achieve their first Premier League win. 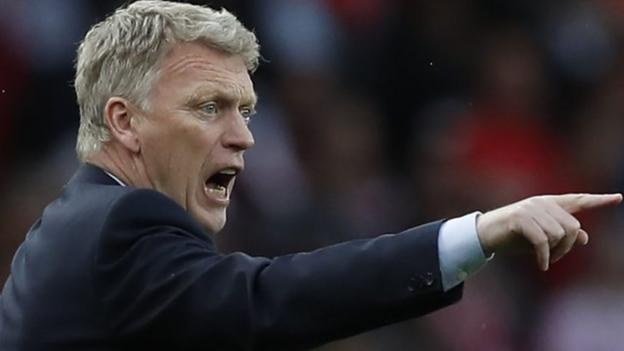 #SAFC
Follow
09:06 AM - 17th May 17
0
1
Sunderland's problem was keeping faith with a manager who clearly had lost his mojo. Moyes was clueless with Sunderland. His team kept suffering and he did very little to help. Under Moyes, Sunderland began their relegation struggle from day one of the 2016-17 season.

David Moyes is damaged goods and that affected Sunderland. The lost 25 league games, the most by any Premier League side. With only six wins all season, Sunderland were relegated with three games left.