What will Kerem Demirbay offer as Bayer Leverkusen’s record signing?

Bayer Leverkusen agreed on a deal for Karem Demirbay before this transfer window opened, paying a club record £28.8 million to take Hoffenheim’s central midfielder. Die Werkself fans are eager to witness what he has to give in 2019/20.

Gauging on Demirbay’s fee, it should be something thrilling. The German arrives as Leverkusen’s most expensive player in history, surpassing the £21.6 million it took to deprive River Plate of Lucas Alario 20 months prior. Kevin Volland, also signed from Hoffenheim, sits third on that list having switched to the BayArena for £18 million in May 2016.

Alario and Volland both played crucial roles this past season, aiding Leverkusen to an all-important fourth-place finish. The two frontmen’s 23 Bundesliga goals between them helped their side to a small one-position jump from the previous campaign, constituting a huge eight-place leap on 2016/17.

Bayer need to continue on that trend. It won’t be easy owing to both Bayern Munich and Borussia Dortmund, two European heavyweights. Not to forget rapid-rising RB Leipzig. Die Werkself recently finished 20, 18, 8 points behind those teams respectively. Narrowly securing Champions League football is one thing but challenging to become German champions, a title they haven’t achieved since 1979, is entirely different.

Manager Peter Bosz must further bolster his squad in order to catch up. This summer, he’s strengthened on the left with Dutch defender Daley Sinkgraven and French winger Moussa Diaby, costing a modest £18 million combined. No doubt, then, Demirbay is the club’s standout signing so far. His form at Hoffenheim, a side he donned for in both the Europa, Champions League, is proof enough. 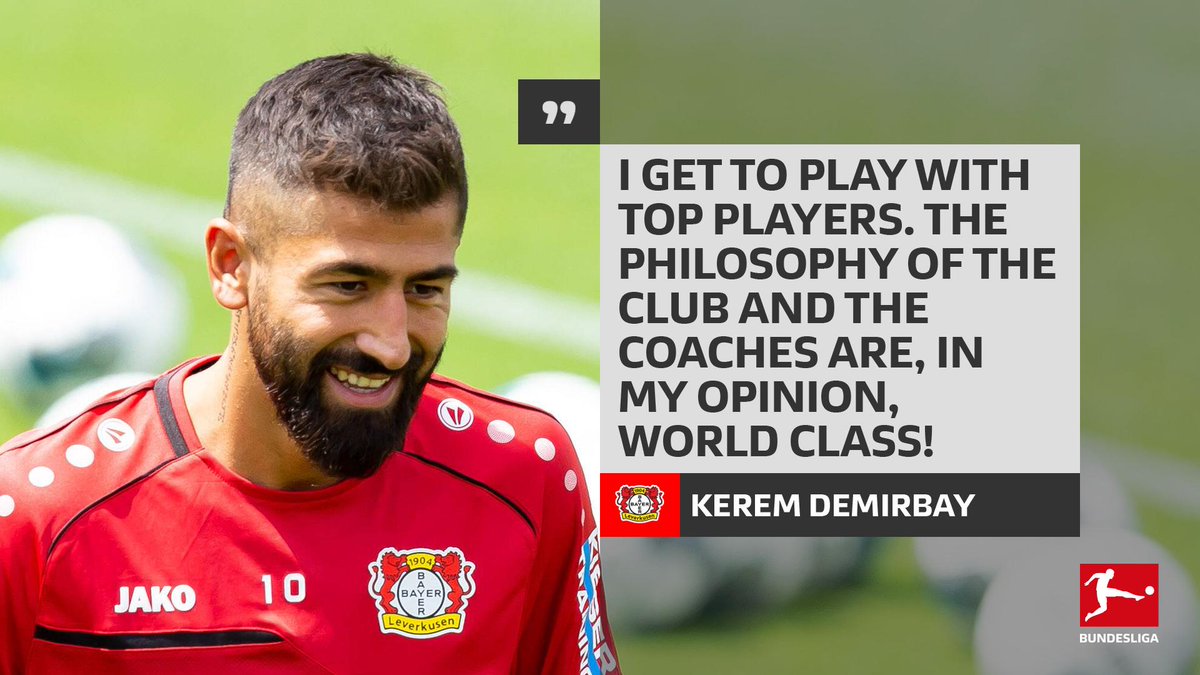 Bundesliga English
Bundesliga_EN
Follow
Kerem Demirbay talks about his new club, @bayer04_en, and his reasons for moving there 🦁

As a two-time capped Germany international, Dembiray has the attributes to enhance Leverkusen’s midfield. His ball control and dribbling will have a notable effect in the final third. So will the Herten-born’s decision making, which enabled him to record 19 league assists in 64 starts while at Hoffenheim.

Demirbay joins an impressive-looking attack in North Rhine-Westphalia. Alario, Volland, Karim Bellarabi, Leon Bailey, and Kai Havertz have all proven their worth, to varying degrees. Those five accounted for 72% of Bayer’s Bundesliga goals this past term.

Fronting the division’s fourth-highest scorers’ line, Alario, as a back-up, Volland, a regular starter, each put their skills to good use. The former’s aptitude for drawing fouls alongside the latter’s solid link-up play will maximise Demirbay’s set-piece expertise and late runs into the penalty box.

Bellarabi offers a counter-attacking threat with his blistering pace. Often deployed on the right, he’s also adept at threading through passes. His tools will work superbly in tandem with Demirbay’s vision and keenness to get into dangerous areas himself.

Bailey is another who breaks at lightning speed. The highly sought-after winger backs that up with his flair for beating defenders and proficient long-range shooting. He’ll soon weave his magic more frequently due to Demirbay’s instinct to provide.

Havertz, the Bundesliga’s most promising youngster at present, excels as a passer, dribbler, and finisher. In fact, there’s little he can’t do. Still improving at 19, his game is likely to go up another level working off Demirbay’s gift for seeing the full picture.

Thanks to Havertz’ emergence, Leverkusen's attack is ready to realise substantial success. It’s in defence where repairs need carrying out. They conceded 52 times this past season, a record worse than all other top eight Bundesliga sides.

Demirbay’s presence can produce an improvement in that area, too. His positional sense along with energy to cover ground will lessen the burden on fellow centre-midfielders Julian Baumgartlinger, Charles Aranguiz, as well as the two Bender twins, Lars and Sven. Such will allow centre-backs Jonathan Tah, Aleksandar Dragovic to fully focus on their task at hand.

Should all go as planned, Bosz' men are likely to retain their top-four place next campaign. Catching either Bayern or Dortmund, though, isn’t in the offing. Those clubs’ superior financial might makes that verging on impossible.

Bundesliga’s two giants are accustomed to mopping up Germany’s top talent. Dortmund picked off Bayer’s Julian Brandt in May. Either they, the Bavarians, or perhaps both, could zone in on Demirbay should he continue to flourish. At 26, there’s still time.

For now, Leverkusen’s record signing has supporters to please, a role to fulfill, and a team to improve.