Danny Welbeck fell awkwardly on his ankle after jumping for a header in Arsenal’s goalless draw with Sporting on Thursday night. The 27-year-old was carried off on a stretcher midway through the first half of the clash at the Emirates Stadium.

Although the 0-0 scoreline was a good result for Arsenal, as qualification for the next round of the Europa League was secured, the players were not in celebratory mood as news filtered in that the forward had been taken to the hospital. He is expected to spend months on the sidelines as a result of the injury and that may be a source of concern for Unai Emery.

Welbeck has played a part in Arsenal's resurgence after starting the campaign in a horrible manner, losing the first two league games. The Gunners are currently unbeaten in ten league outings and the England international has often been called upon to help when necessary.

Apart from providing an option for either of Pierre-Emerick Aubameyang and Alexandre Lacazette who are Emery’s only senior centre-forwards, he can also operate from the flanks. But with all that has been said, the club can still get by without Welbeck.

The former Manchester United forward has a wretched injury record since moving to the Emirates Stadium from Old Trafford in 2014. This latest setback is his seventh serious problem since moving to North London. That has limited his appearances and performances for the team. It will also likely not be the last, just as has been the case with Jack Wilshere, who recently moved to West Ham.

Welbeck's contract with Arsenal runs out in the summer and the fact that there have been no serious talks to renew it speaks volumes about his importance to the club. Aaron Ramsey was in the same situation with The Gunners, with Arsenal choosing not to renew the Welshman's contract. For Welbeck, that should tell him everything he needs to know. 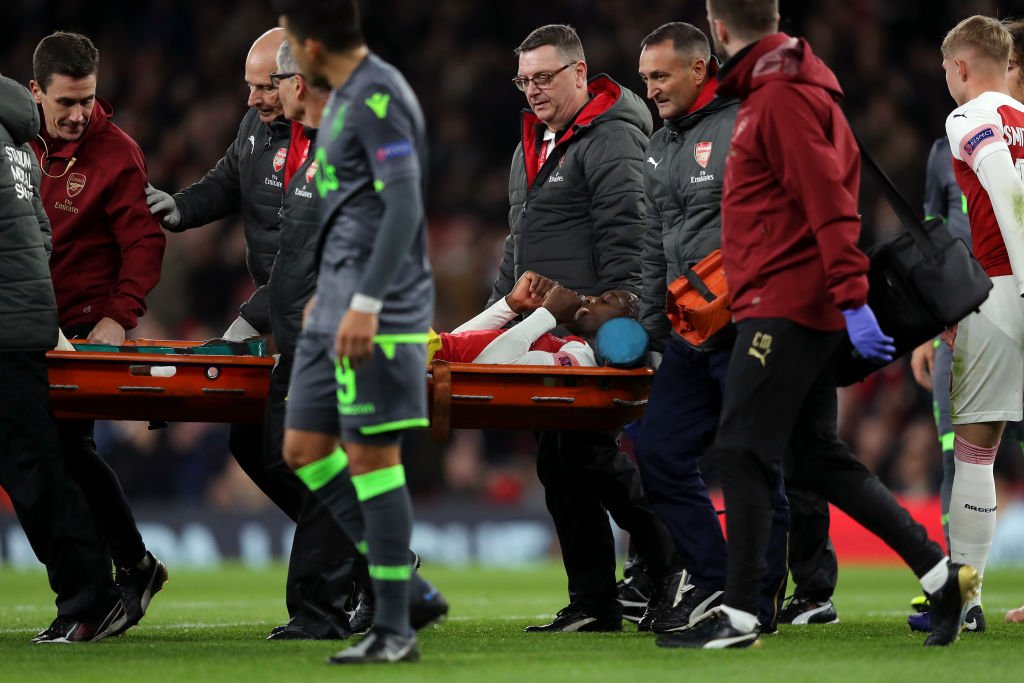 Arsenal's Danny Welbeck has had surgery on a broken ankle.

With just one goal to his name in the league, despite making eight appearances, Arsenal can do much better. In fact, it was expected by some that the Spanish manager will send him on his way after taking over, but Welbeck was given another opportunity to impress. So far, despite scoring twice in the Europa League this term, he is way behind the other two forwards in output.

Arsenal has drawn the last four games. Those poor results have largely been due to a lack of scoring. When either, or both of Aubameyang and Lacazette are not in a game, there should be another source for goals among the forwards. Welbeck is not up to the task. He has just become unreliable both in terms of goalscoring and injuries.

Emery must, therefore, use this latest injury as the opportunity to restock. There are options aplenty available. Eddie Nketiah needs to be given the chance to play and it seems as though Emery himself is beginning to realise that...

“[Our] first [step] is to look inside, we have one striker who is working well in the Under-23s and improving also in Eddie Nketiah,” he said.

Nketiah has made the first-team squad in both the EFL Cup and Europa League, but is yet to play a minute of senior football this season. The 19-year-old has a formidable track record at youth level - with 38 goals in 50 games for the U23s and U18s, while also scoring just 15 seconds into his first-team debut in an EFL Cup game under Arsene Wenger last term. Nketiah would go on to add a second goal in that match.

There is also the talented winger Reiss Nelson who could be brought back from his impressive loan spell at Hoffenheim. The 18-year-old has scored six goals in seven Bundesliga games this season. There is no doubt that he'd add some creative spark to an Arsenal attack that struggles when their star names aren't performing.

Looking outward, there are several players who could serve as Welbeck replacements either in January, or the summer; when the 27-year-old’s contract is due to expire. The list includes Cristian Pavon of Boca Juniors and Lille winger Nicolas Pepe.  The latter has been a revelation this season, helping the French club to second position in the league table. He has contributed to 13 of the team's total goal haul of 21, which immediately makes him a better option that would bring some much-needed potency to a sometimes blunt Arsenal frontline.