Brazil more than a one-woman team

A nine-game losing streak is usually not associated with Brazilian football but that is what the Selecao women endured for the better part of a year. From a country where football means much more than many would understand, the South Americans are a reference point in the game. But Brazilian national team football as a whole has been through some bad times of late. Star player and captain Marta's injury heading into the World Cup in France appeared to rub salt in the wound.

The men's team was tipped as one of the favourites to lift the World Cup in Russia last year. Neymar and co failed to get past the quarterfinal stage. For the women, it's been even worse. Entering their eighth World Cup without a winner's medal, the team has not lived up to expectations. Against all odds, this edition in France is expected to be different. That is what makes Cristiane's hat-trick against Jamaica in the first match so important to the Brazilians.

The 34-year-old Sao Paulo forward made history in the game as the oldest player, male or female, to score a hat-trick in a World Cup match. Her goals secured a  dominant victory that brought relief to a nation. As inspiring as the triumph might be, however, there were still clear signs the team will need to do even better to progress in the competition.

Of course, as has been seen many times, it's not always the best team that wins a tournament. Chelsea surprised many to lift the 2012 Champions League in front of Bayern Munich fans at the Allianz Arena. One stumble from even the best side can spell the end. But you cannot rely on your betters having a bad day at the office. 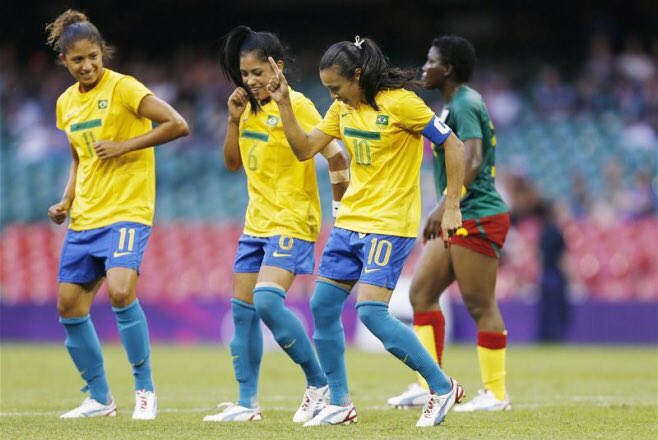 ANÏAS NIИ
sisterkaramazov
Follow
BRAZIL, seleção ("the team") or canarinhas ("the canaries"): v disappointing lately; probably marta's last ride, which is a shame, but for now she still holds the record for most cup goals (15); have participated in all 8 cups but never won https://t.co/IzYR7IcUdz
Follow
17:59 PM - 6th Jun 19
0
3

Sometimes it's just about wanting it more. On other occasions, the manager gets the tactics exactly right. Japan could not break down an Argentine side that was determined not to concede on Monday despite having La Albiceleste in all their previous encounters. If such a game is in the knockout stages and ends in a penalty shootout, it becomes anybody's game.

But again, the Selecao cannot afford to bank on luck. The competition has been taken up a notch with the likes of hosts France, England and Spain all raising their games. Then there are the powerhouses like the United States and Germany. They haven't slipped. Both are gunning for further silverware. The odds are stacked against Brazil. How will they respond?

Vadao selected a squad overflowing with experience. They simply cannot be written off. Cristiane's performance in the first game, coming at a time when six-time Ballon d'Or award winner Marta could only watch from the sideline proves this is not a one-woman team.

Australia is up next. They have their talisman in Sam Kerr. The Matildas are a level above Jamaica if not two. A victory there will secure passage to the next round. A loss won't be catastrophic as long as Brazil gains a result in the final match against newcomers Italy.

If their backs are against the wall, expect Vadao's side to come through. Whether they can reach the final and lift the trophy is another question altogether.

When it comes to European football, the Saltire isn’t the exclusive property of the Old Firm. Glasgow City and Hibernian LFC will also be carrying the Scottish flag onto the…

The Women’s Super League showpiece opener between Manchester City and Manchester United was my first live experience of a ladies football match. Like many others, I had…

The FA Women’s Super League is the top-flight for women’s football in England. The 12-team division comprises clubs who enjoy the financial backing of established men's…