The African Cup of Nations is like any major international tournament. The bigger nations with known stars are expected to pull their weight and reach the latter stages of the knockout rounds. For the most part, that has been the case.

There are exceptions to the rule. South Africa stunned hosts Egypt in the Round of 16 and Benin shocked Morocco, holding their own for 120 minutes before advancing on penalties. Ghana suffered a similar exit but were unlucky to draw Tunisia, a powerhouse themselves, so early in the elimination stage. With those exceptions noted, it has to be said the AFCON 2019 isn't set up to be a tournament for the underdogs.

It's good for African football that the top players are becoming attuned to the competition and rising to the occasion. A summer schedule that doesn't affect club commitments makes it easier. Performances from stars like the Liverpool duo Mo Salah and Sadio Mane, along with Manchester City star Riyad Mahrez raise the bar higher, challenging the next generation.

In the past, the AFCON was unpredictable due to the lack of squad depth. There were few players plying their trade at Europe's top clubs. That's changed and for the better. While Salah and Hakim Ziyech's talents will be missed, so will some others. In addition, many remain.

No one is running away with the Golden Boot just yet. As you might expect, Sadio Mane tops the charts with three strikes already but the Senegalese is far from alone. Three other players match his total and, despite all my talk about top UEFA clubs, two play their club football in the Chinese Super League.

The DR Congo's Cedric Bakambu kits up for Beijing Guoan. Before leaving for the tournament, he'd posted nine goals and three assists in the CSL, AFC Champions League and Chinese FA Cup. Unfortunately, he won't be able to add to his total. The Leopards fell to Madagascar in the R16, another loser in the penalty kick lottery.

Nigeria fight on, though, and their China-based striker is also on three goals. Shanghai Shenhua's Odion Ighalo powers the Super Eagles attack, nothing new for the 30-year-old. A refreshing change would be carrying his country to the final and hoisting the trophy. Nigeria haven't done so since 2013, two years before the veteran earned his first cap. 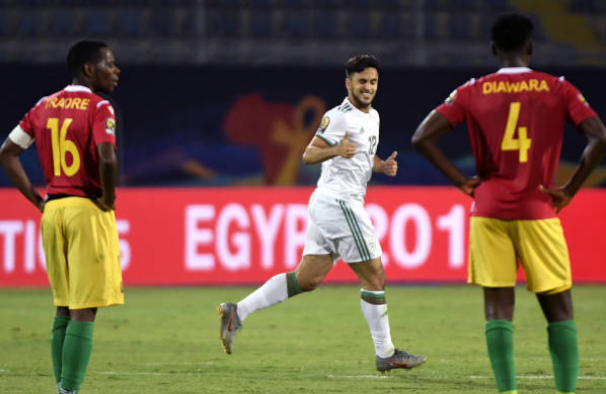 DZ Football
DZFootball_en
Follow
Adam Ounas has scored 3 goals at AFCON 2019 without even playing 90 minutes. He must be thinking what more must he have to do to get into the team. The top scorer at the tournament. Such a bright future. Great super sub. https://t.co/zjL13G2lvC
Follow
00:52 AM - 8th Jul 19
11
80

The other triple-threat in the competition is an Algerian who doesn't play for Manchester City. Napoli's Adam Ounas vies for the Golden Boot ahead of his more celebrated teammate even though he's barely played in the tournament. His goals all arrived after coming off the bench. Mahrez isn't far behind, however. The Sky Blues' super-sub has two strikes.

Also sitting on two goals and looking for more is a familiar name to Premier League fans. Wilfred Zaha may not be returning to Crystal Palace when all is said and done but no one can claim he hasn't enjoyed a successful debut at the AFCON.

Zaha's success can be pinned on the chemistry he's developed with AC Milan midfielder Franck Kessie. The Ivorian isn't sharing the view from the top of the assists chart. his three goals created raise him above all the rest.

A boatload of players, including former Leicester City standout, now on loan at Fenerbahce, Islam Slimani.

Some nations progress by keeping the ball out of their own net. Most notable in this regard are Benin and South Africa. Unfortunately, both nations fell on the first day of the quarterfinals.

Squirrels keeper Saturnin Allagbe proved a tough nut to crack between the Beninese sticks. He came up with a key save in the penalty phase to help eliminate Morocco. He held Mane at bay in their quarterfinal match yesterday but couldn't keep Everton's Idrissa Gueye from pushing the Teranga Lions into the semifinal.

Meanwhile, Bafana Bafana manager Stuart Baxter was spoiled for choice in goal. In the team's first four matches, he rotated Bidvest Wits' Darren Keets and Supersport United's Ronwen Williams to great effect. Williams kept Mo Salah and Trezeguet off the scoresheet to earn a quarterfinal berth. Baxter broke his rotation to stick with Williams against Nigeria but the Super Eagles proved too stern a test. Samuel Chukwueze struck just before the half-hour and William Troost-Ekong at the death to give the Super Eagles a 2-1 victory.

Their keeper, Daniel Akpeyi plays his club football for the Kaizer Chiefs in Jo'burg. He may need to fend off some stick when the tournament concludes and he returns. A golden glove might help.

Temitope, an ardent soccer fan. I may be based in Lagos but I watch as much European football as I can. I've been writing about football for several years, before I joined IRIAW you may have seen my work on The Football Weeks. I'm also a keen music fan